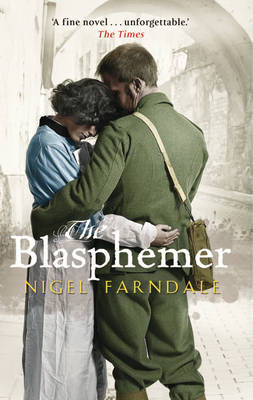 Q: The key moment in the novel draws the reader into an intense moral dilemma:  Daniel’s ‘cowardice’ when the light aircraft ditches into the sea, as he climbs over his trapped girlfriend to save himself. Did a real event inspire this?

A: About 25 years ago some student friends of mine, two couples, were in a car that careered into a canal in France. As it filled with water, the student in the back seat panicked and scrambled over his girlfriend to get out. They all survived but the girlfriend broke up with the boyfriend soon afterwards. That story haunted me; made me wonder whether I would have acted any differently. The truth is that you don’t know until you are tested. I once asked Clive James if he thought he would be able to sacrifice his own life to save his daughters and he gave me perhaps the only honest answer a man can give: ‘I really hope I could. But you never know.’

Q:  ‘Monkeys make men. Men make angels.’ This is the opening quote of the book, and flags one of your novel’s themes: the debate between science and religion, as expressed in the ambiguity of the angel-figure Daniel keeps seeing. Who or what was behind this idea?
A: Professor Richard Dawkins, in a roundabout way. I asked him — in an interview — how an atheist who believes in the selfish gene can explain altruism. He gave an elegant but not wholly convincing answer. I came away wondering how a man so certain in his atheism would react if confronted with something his ‘cold philosophy’ could not explain… hence the ‘angel’ (with inverted commas for wings) which the atheistic Daniel might or might not have seen in the water when he was swimming for help after the crash. Daniel soon explains it away, dismissing it as an hallucination triggered by frontal lobe epilepsy. But a seed of doubt has been planted in his mind.

Q: But the ‘angel’ reappears.  Where do you stand on the atheism versus religion debate? And what is the significance of the ‘blasphemer’ of the title?
Although there are Islamist bigots in the novel who hold placards which read: ‘Behead the Blasphemers!’ I was more interested in blasphemy as a metaphor than as a narrowly defined religious concept. When Daniel leaves the woman he loves to die on the plane, that is a blasphemy. The No Man’s Land that Andrew stumbles into is a blasphemy as well. I had come across this use of the word whenresearching the First World War chapters. In a latter to his wife from Passchendaele in 1917, the artist Paul Nash wrote: ‘No glimmer of God’s hand is seen. Sunset and sunrise are blasphemous, they are mockeries to man; only the black rain out of the bruised and swollen clouds or through the bitter black of night is fit atmosphere in such a land.’

As for the angel question, I’m on the side of the apes, but I tried to be as enigmatic as I could about the possibility that there might be a religious dimension, so that neither Daniel nor Andrew would know how to respond to it. That way they become the partially sighted leading the partially blind through a moral and spiritual maze. I see the ‘angel’ as a useful metaphor, a literary and metaphysical conceit that links past and present. When he finds himself lost and alone in No Man’s Land, Andrew realises that he has descended into hell and must, with the help of the ‘angel’, find a path back to the light. In the present day narrative, meanwhile, Philip, Daniel and Hamdi can be seen as forming a trinity — father, son and holy ghost. That would make Wetherby, in allegorical terms at least, the devil.

Q: The Blasphemer has a parallel narrative, set in the First World War. Why do you think it’s so popular at the moment to weave together a modern and historical narrative, as you have?
A: I think it must be connected with the turning of the millennium, a time for looking forwards as well as back. There is always a moment when living memory passes into history. In the case of the First World War, this happened in 2009. When the last of the veterans died, our remaining link with that terrible war was broken. The only way back into their minds is through literature, empathy and the imagination.

Q:  You dedicate The Blasphemer to the memory of your grandfather, who fought in the First World War.  What do you mean by saying that he died ‘in the mud at Passchendaele, and again seventy years later in his bed’?
A: Passchendaele cast a long shadow not only over my grandfather’s life but also my father’s, and mine. My grandfather was an affable man, most of the time, but throughout his life — he was almost ninety when he died — he was prone to dark mood swings, and when these came he wouldn’t talk for days, sometimes weeks. I had little doubt what lay behind the swings, having grown up listening to his stories of life in the trenches.
In 2007, my father and I visited the Passchendaele battlefield for the 90th anniversary. It was a moving experience. On our last day there we were driving along the Menim Road and came to the spot which had been known in the Great War as Hellfire Corner. We remembered a story my grandfather had told us about this place. He and Quartermaster Sergeant Zaccarelli had been galloping up to the Front with an ammunition limber. When they reached Hellfire Corner the Germans started to shell them. Zaccarelli was killed, along with a horse. My grandfather managed to cut the dead horse free, drag Zaccarelli’s body into a ditch and carry on up to the Front with his delivery of ammunition.
It amounted to a family legend because there were no witnesses or dates. All we had to go on was this unusual surname. As we were driving along that road we came across a small British war cemetery and stopped to look around the ranks of white stone. There he was, only the surname was spelt slightly differently. Company Quartermaster Sergeant John Zottarelli died on 28 August 1917, a month into the Battle of Passchendaele. He was 27. He was a real person after all, not a myth, and when we stood before his grave my father and I felt the hairs on the backs of our necks rise. This was an easy place to die. An arbitrary place, too. Zottarelli was killed. My grandfather, who was at his shoulder, lived. This meant that my father had been given life, and so too had I.

Q: The Blasphemer is structurally complex, how did you plan it?
A: The starting point was to ask what the repercussions would be if a healthy, loving relationship was suddenly tested — what would happen if a man was not prepared to risk his own life to save that of the woman he loved. I wrote three chapters, starting with the crash, and showed them to my agent. He suggested the novel should start a couple of chapters before the crash, so that the reader had a chance to build up a relationship with the characters before their ordeal. It seemed to work.
After this, I found myself going even further back in time. The parallel narrative involving the ‘cowardly’ actions of Daniel’s great grandfather in the First World War started to take shape and, at this stage, it did feel as if the novel was writing itself. There seemed to be a resonance between past and present, with certain characteristics rippling across the generations. I had a sense of the characters becoming animated by strange ancestral forces that they vaguely comprehended without quite knowing why. Andrew’s story came to constitute one cymbal, as it were, while Daniel’s constituted the other — with themes vibrating back and forth from one to the other.
I also found that with two narratives you double the suspense. The reader is left hanging all the time, wanting to know how a conflict in one storyline will be resolved, while being drawn into another. When the reader has become absorbed in the second story, you take them back to the first, and so on. To differentiate stylistically between the two time signatures, I wrote the historical passages in the present tense and the present-day scenes in the past tense.

Q: Another strand of the story is that of Mahler’s Ninth Symphony.  Is it true that there was an alternative opening of the symphony that was lost?

As far as I know, Mahler did not write an alterative opening, but his belief in ‘the curse of the ninth’ is true. It haunted him, and he refused to call his ninth symphony ‘The Ninth’. I liked the idea of a piece of music being cursed: Morris and Wetherby are both doomed once they hear it in their heads. I was also playing with the idea of the novel having a symphonic structure, with movements, refrains and resolutions. This is why the novel begins with a conductor’s baton being raised and ends with it being lowered.